How many copies are broken on the topic of the healing of genus, are countless, and often all understanding of this phenomenon is flipped upside the head. So, it happened, but this topic is really actual – that it is, in the modern world the lack of male power in the genus is the main reason of many problems, both diseases, and relationship of building a family, numerous divorces, childbirth, bringing up children, culture of the family as such. This phenomenon has many aspects, the most acute problem of the genus is in Russia, and this is evidence of the slow disappearance of the nation.

The strike caused on the traditional culture of Russia in the 20 century, can be fatal for our people. Not to say that our nations, especially European origin, things are much better, but in Russia this problem is most acute, which gives reason to psychologists to talk about the mysterious Russian syndrome – early death (especially male), alcoholism and drug addiction, suicidal tendencies, low culture of life. This is the disease of our nation, the disease is deep, sitting in each of us, the disease of unforgiveness, a heavy heritage of the past, to which we are used to, as people who are able to get used to everything.

Of course, there are many healers who want to help in different ways, and trainings on the restoration of generic energy are quite popular. But for some reason people decided that a shaman should heal the genus under the sounds of a tambourine or homebrew psychologist, or some sort of arrangement?

The very formulation of the question, because speaking of the seven tribes of the genus, we are talking about hundreds of people who lived and survived in disproportionately difficult conditions than our lives, passed the fullness of life experience, crossed an incomprehensible border for us and yet alive and associated with us invisible force. And who and how will heal them? Who but God the Creator fills the family with life-giving power for centuries.

The power of genus

Most people argue that the power of our genus comes from the from pagan ancestors and Christianity do nothing and that christening of infant is overlap the energy of genus. It is important to understand that each of us is worth at least a few dozen of generations of believers to Christ and have survived only because this faith, prayed their children from diseases and all sorts of risks that have protected their family from numerous wars, disasters, epidemics. This Faith is in our blood, in our genes.

In everybody, whose Soul is alive, who is listening the words of prayer, this faith wakes up. Someone has tears in his eyes, trembling, goosebumps, unmistakable repeating of an unfamiliar prayer text, a sense of Divine presence, which cannot be confused with anything. Someone has internal irritation, ill-concealed anger and desire to leave. Our internal cleanliness determines everything!

And speaking about the Faith in Russia – it is alive, it passed a melting pot in dashing years, it was treated, it became stronger than before. This faith is invisibly present in people, it is ready to heal our long-suffered people and earth.

Synergy and healing of Genus 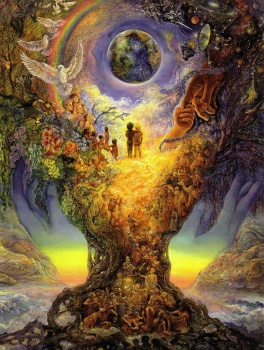 Synergy is the practical method, because the fact itself of appearing this energy is able to heal the most difficult problems in the genus, karmic nodes which already seemed to find the solution. This particular evident in the relation to children and culture of married life.

There is no secret, that we have a lot of divorces and often mutual understanding and agreement of spouses is determined only by hormonal status, over the years the relationship weakens and falls apart. And it happens enough fast. So, it is the «love» chemical and euphoric, for the sake of someone, but not yourself, and certainly not to closed one.

Cohabiting of personalities, different form of inter dependence, frank calculation of self-trading, everything except Love, given to us by God as his flesh! As the essence of the basis of our life. People are not able to love each other, even closed, even relatives without it.

It’s often spoken that a child doesn’t love his parents. How can he love them if he doesn’t see a God in his parents? Who saw his brother, those saw a God himself. Anthony of Sourozh such said. And how not to love him? Such! But it is not we who love, God loves all of us in us, and in this unity is the true healing of any relationship. So, our ancestors lived in love and harmony to God, neighbor and bequeathed to us. And the tablet of relations, healing of family ties, bringing up children in not fully family, especially those deprived of male energy is the Faith and Christian sacraments, first of all Holly Communion.

As I have no store, lost cry bitterly. This Russian proverb best describes the state of weaning from God, only this crying in our generation deep inside, as well as the subconscious search for divine grace. Because these are our genetic programs, inherited from our ancestors.

Four conditional generations, grown up in Russia from the time of theomachy, gradually lost the blessed qualities of traditional Russian families, especially this is clearly seen in the number of children in families, the strength of marital relations, life expectancy, health, and all these qualities have reached their lower limit, beyond which we can talk about the extinction of the nation. So, ecclesiastical and unecclesiastical 90 years good past a scythe on the Russian people. And now the cost of life of future century for us is the only in possibility to return to God. But only our desire or intention is not enough.

St. Gregory Palamas said that God sends the Divine energies to the world in order people are sure that he exists. This is an immutable truth, we find God through the sensory comprehension (vision) and as it said in the East: who saw light, always would follow him. Indeed, it is unreasonable to say that a person can leave the faith or change it.

The faith is a continuation of animal’s instinct in a human, it is a unity with all that is, is the victory over original sin of separation from God. Therefore, it is impossible to leave the Faith, you can’t come to it. Each of us has the such faith in the deepest subconscious level, because like as any human being, a man is a creation of God, and exists only due to unconditional instinct during intrauterine development, or in extreme situations.

In a comparison of animals, each person has entered in the state of the original sin of excommunication from God, juxtaposition himself against the world, and everyone has the opportunity to return to God and the unity with the world, through the knowledge of God. And the key to this is the Divine energies, discovered by the elders and saved by the Orthodox Church, which are not the unknowable essence of God, but his available to us manifestation.

The key of returning to God is Synergy

Why is exactly Synergy? The principle of assistance and co-operation means the unity of interests, that is a person sacrifices his will and his individual manifestation to the Creator and all visible and invisible world.

This leads to what the true Faith is -the absolute non-inseparable unity with God. This principle of the God-man is reflected in divine incarnation of God the Son, which is openly shown only in Christianity.

Speaking about the full understanding of God – Trinity, we speak about the God-Father as unknowable and unreachable entity, the God the Holly Spirit, as fully life, and God the Son, as a spirit, living in a man and only in a man, who carrying the experience of the life of the God-man Christ, which became available to all.

It is this hypostasis that separates Christianity teaching from another teachings and religions, including the Abrahamic sense, Islam and Judaism.

A man is created for the Holly Spirit, he is an icon-bearer, He lives in us, one way or another, it is in Him each of us experiences the most powerful States of love, happiness, fullness, spiritual ascent, unity with the world. We, being in the blindness of the excommunicated mind, automatically ascribe these States to ourselves, but it’s true, these are manifestations God in us.

Also, like as negative emotions are manifestations entities attacking us. The very structure of man and his consciousness says that we do not possess anything of our own, but are completely the creation of God and his manifestation. And attack, as well as a permanent presence in the use of the dark side is not the norm, and the distortion of creation, the disruption of our nature.

The cradle of man – Nature

It is all permeated with ecclesiastical substance, each creature, each living being like as a plant or an animal has its own spirit. It is the spirit of the plant or animal that is the transcendental reflection of the controlling instinct. All except a man, because a man doesn’t have another spirit, except as the Holly Spirit. But as the only one of living creatures with free will, conscious and right to choose, to live in Spirit or outside of him.

Without the Holly Spirit we are dead, it is a kind of life, and in any case, whether a person believes or not, life is supported in him only by the Holy Spirit. Life without Him is always turned out a moral degradation, prior to physical decomposition. That’s why it is said that the blasphemy against the Holy spirit will not be forgiven you, because rejecting it, a man rejects Life in himself.

Confirmation of this evidence is the universal well-known all over the world in the ancient times the shamanism teaching. Somehow, the shaman is always needed intermediaries in the form of the spirits of plants, animals and dead ancestors? Why does a man not have his own Spirit, when as any plant or animal has its, but rather to say that has its own spirit, but he was excommunicated from the universal Spirit, and therefore, for practical use the shaman is forced to seek the assistance of other spirits?

This is the most reliable and correct proof that our ecclesiastical nature is damaged and the only possible way to recover it, is the sacraments of Orthodox church and synergy.